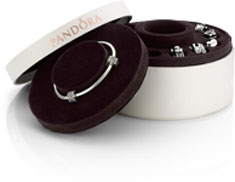 What I’ve found out about the round jewelry box is that it will NOT be included with the Iconic Gift Set, and instead, it will be a part of the Black Friday gift set – which is yet to be announced.  Apparently retailers are only allowed a limited number of these Black Friday gift sets and will not be able to reorder them.  Also, the Iconic sets are already being sold in stores, and contrary to what I was told before, you will not be able to switch out the clips :(.

Pandora has had the Iconic Gift Set available a couple times before, usually during a holiday, most recently during Mother’s day this year.  It’s the perfect set for beginners or to get someone started.  Well, members of the Pandora Club North America received an email yesterday announcing that the return (and permanent addition) of the Iconic Gift Set.  In the email, it specified that the bracelet would be comprised of 2 “S” clips and a $35 charm of your choice for $140USD.  But what caught my eye was at the bottom of the email – the inclusion of a round Pandora box with purchase??  Of course I rang my store immediately for details, but they hadn’t even heard of the set being offered again.  After a few calls back and forth, they found out that the set will be available soon.  Again, I was more intrigued by the jewelry box as it looks very much like the one being offered in Asian countries as a GWP a few months back.  The answer I received was they weren’t completely sure if the box came with the bracelet, but they would have to order them separately.  More news on this GWP when I get it!