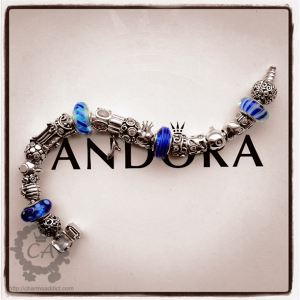 Short on the heels of the Trollbeads Retirement List for 2013, Pandora has come out with their official list of charm that are being discontinued!  This list is located in a permanent and easy to find location under List in the Main Menu, titled 2013 Pandora Global Retired Jewelry List.  Unlike Trollbeads, Pandora does offer incentives to retailers for returning these retired charms; not all stores will send these pieces back, but most Concept Stores are likely to.  The last day for dealers to return these items will be April 2nd; I would recommend buying these charms sooner rather than later if any of them are on your wishlist.  Uncharacteristically, this is a worldwide retirement list which indicates a desire from Pandora to create a more uniform catalog of jewelry, instead of each market determining which charms to retire.  Therefore, some of you may recognize that some of these charms have already been retired in the US.

We’re saying goodbye to the last of the Zig Zag and Ribbon Murano beads, as well as the Candy Striped Muranos.  I’m very surprised regarding the Candy Striped collection; Pandora has already retired two colors from the Candy Stripe Muranos, the light blue and light pink.  The Zig Zag and Ribbon Muranos have all but disappeared from the US markets last year with only the blue of each kind remaining.  The orange Flowers for You bead (one of my favorite designs) will be joining the black/yellow Flowers for You in retirement, yellow Bubbles Murano and the wood flowers are also leaving the line.

Not that many silver charms on the chopping block, thank goodness.  The major categories that are being discontinued are the cameo zodiac dangles, which I’m not terribly surprised about.  The birthstone dangles have been retired in the US since last year, so no change there.  The horse head, after Pandora brought it out of retirement just last year, is leaving again.  The apple with the worm has been replaced with the apple of my eye which has a two-tone leaf.  And there are two enamel charms being cut from the collection.

There are just a handful of gold charm on the list and all the XL charms that came out early 2012 are being retired.  More earrings, necklaces, rings, and watches are also being given the axe.  Again, to check out the complete list, please refer to the 2013 Pandora Global Retired Jewelry List page.  Pandora only had one round of discontinuing charms last year, so we may expect the same this year.  What you think of these charms?