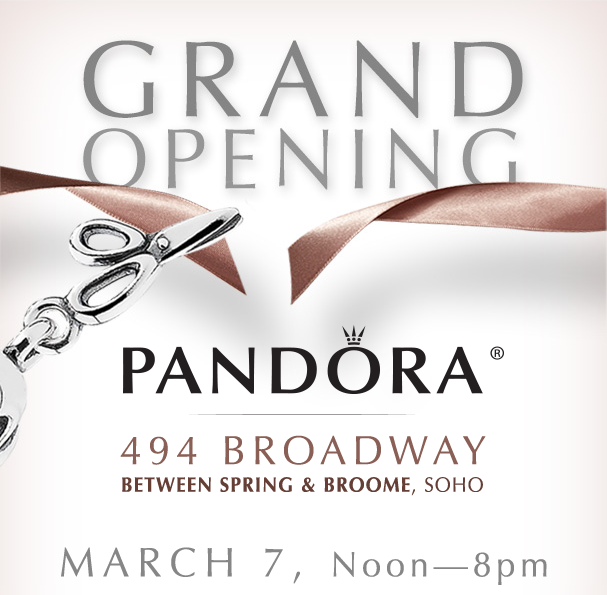 The Flagship Concept Store for North America, located in the SoHo neighborhood of New York City is preparing for their Grand Opening on March 7th.  While the store opened its doors in early December, the official “ribbon cutting” was always scheduled for early this year and the time is finally here, with the exciting event happening in less than a week!

The Grand Opening is presented by PANDORA and Lucky Magazine, with Lucky Accessories Editor Melissa Lum in attendance.  Not only will the new Spring 2013 charms be available to shoppers, the white gold collection will be unveiled with this store being the exclusive location to carry it anywhere in North America!  Customers attending this special event will receive free gifts from Lucky Magazine and PANDORA gifts with purchase.  Light refreshments will be served and a DJ for music, running from noon to 8 pm EST.

I am SO excited to announce that I will be attending this Grand Opening in person!  It’ll be the first time in years that I’ve been to New York City, and I’m as giddy as a schoolgirl!  A huge thank you to PANDORA at Broadway in SoHo for the invite :D.  Of course, I will be live tweeting on our Twitter feed and following up with a full coverage post.  If you’re in the area, I’d love to see you there.  I can’t wait!