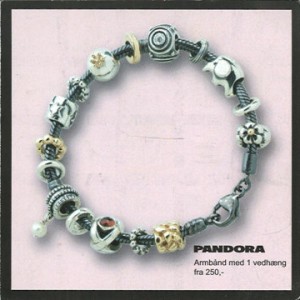 In 2012, Pandora celebrated their 30th birthday with a brochure of their landmark moments.  This included the highlight for the company which was when they released their patented threaded bracelet and a small collection of charms in 2000.  They called this the first 15, and after some inquiry a few months ago, Pandora finally named those beads.  These were part of their very first release and almost all are retired except a couple.

The ladybug listed above apparently was an earlier version that they don’t even have a picture of, but was quickly replaced with the common one (790135).  Muranos were apparently introduced sometime later so are not included in this first collection.  I had some of these charms already but made it a priority to find the rest since they’re mostly retired (some for quite a while now).  I’m going to keep this bracelet simple with just the first 15 Pandora designs.  How do you think the old designs compare to the new ones?