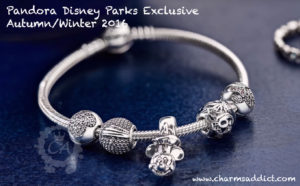 More exciting previews tonight as we have a sneak peek at the Pandora Disney Parks Exclusive coming up soon!  These pieces are only available at Disney properties, including Disney World and Disneyland worldwide.  Chef Mickey dangle will be released at the start of the Epcot International Food & Wine Festival on September 14th, the Disney World 45th Anniversary Castle should be launched on October 1st, and the rest of the collection will be available on November 21st.

I’m excited to say that most likely everything here should be available for sale online at the Disney Store once they come out.  In person though, the Chef Mickey will only be sold at Epcot for the International Food & Wine Festival.  This year is Disney World’s 45th Anniversary and to celebrate they are releasing the 45th Anniversary Castle which is very similar to the regular Disney World Cinderella Castle but with the addition of the 45th Anniversary banner.  This will also be limited to Disney World if you want to get it in person.

I love anything Pandora Disney so I’m looking forward to all these new designs, especially the clips since there’s only a couple other options right now.  There’s another blue charm for the new year – 2017, and the red I Love Minnie bead is the perfect companion for the white I Love Mickey.  Lastly, Magical Fireworks is a colorful mix of enamel and CZ and represents the nightly fireworks show at the Parks.  There may be a couple more designs coming out for Christmas so we’ll see.

Also, right now there’s a sale at the Disney Store online, but it is mostly for their retiring designs.  The deal is buy 3 or more and get 25% off or buy 2 and get 15% off.  If you haven’t indulged in the Disneyland Diamond Anniversary beads, now’s your chance!  Have you been a fan of the Disney exclusive charms?