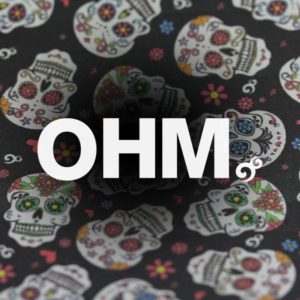 For the start of the month, Ohm Beads is launching another big group of designs heading into the holidays!  There’s the Bead of the Month, Tom the Dead, Holiday Drinks 2016, Typo, and a couple special editions Dutch Tulip and new additions to the IQ Charms line.  Only the Typo Collection will be around for the foreseeable future, as Tom the Dead and Holiday Drinks are limited edition. 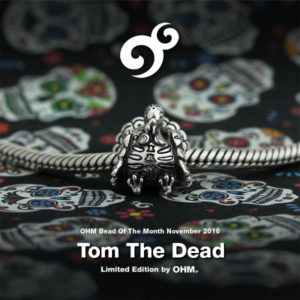 Starting off with Tom the Dead, this is the reincarnation of Tom the Turkey and he has an interesting philosophy on his existence:

If life didn’t have an end, would it still have a meaning? It is in death that we learn the value of life. Live your life! Do not fear death. What is death but the next great adventure?
Everyone’s life will end. What can be changed? We are afraid because we don’t know what awaits behind the final curtain. We feel scared of the unknown. But why be afraid?
If we experience life as an adventure, we will be ready to face the end of it. Death is not the opposite of life, but a part of it. So live fully, dance fearlessly, be one with life and it will not scare you at the end.
So put your best on, color your life with the paint of courage, face the enemy that is also a true friend. Nothing is ever certain. No one gets out alive.

There are 555 of these charms made and it’s quite a bit bigger than the original.  The day of the dead detailing is intricate and exquisite along Tom’s body and I’m sure it will be very popular!  Some stores have already sold out through their preorders, so I would recommend getting it first if you love this piece. 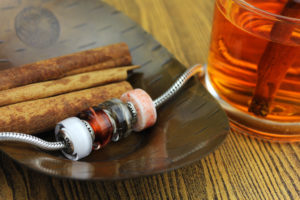 The Holiday Drinks Collection 2016 is a re-design of a popular limited edition series from 2013 called Mulled Cider, Cold Milk, Hot Chocolate, and Egg Nog.  The original features round beads but Ohm has more recently made the barrel flat top glass their signature look.  So while the colors or names of the beads have not changed, their shape is much different.  This release will also allow new fans the ability to picks them up if you miss it the first time. 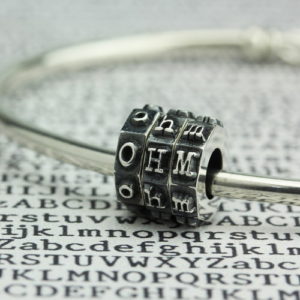 Next is a very large new collection but the charms are actually quite small.  Typo is a set of letters that allows you to spell out anything you want.  The beads are spacer sized and can be strung together to form any words.  There are upper and lower case letters on the charm so it’ll spell out the right word in any rotation.  This is so cool and a great way to communicate special meaning to any bracelet. 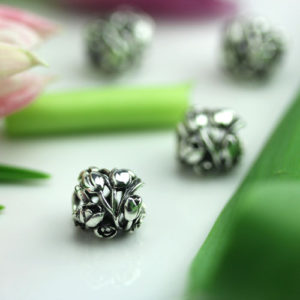 Ohm Beads Netherlands is getting another charm in their Going Dutch series and this one features another iconic symbol – the Dutch Tulip.  This is a gorgeous design and I adore floral motifs so it’s my favorite from these releases!  The Dutch Tulip is exclusive to Holland retailers but stores can ship worldwide.  While this is a special edition, it is not limited so fans will have some time to get it. 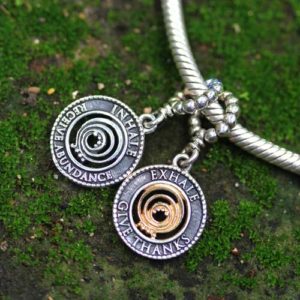 Lastly, we’ve got a new addition to the IQ Charms line by Charms Life in two versions. It’s called Gratitude Quote and is in the same medallion style as the rest of their collection.  It reminds wearers to “Exhale – Give Thanks” and “Inhale – Receive Abundance.”  There is a silver version and two-tone version with gold plated detailing.  These are also special edition and can only be purchased from Charms Life.

Ohm Beads have large universal cores so can be worn on all different bracelet styles including Pandora.  These designs can be ordered from Ohm Beads and my preferred retailer Perlen.  Are you excited about these new offerings?