Ohm Beads is releasing a dizzying number of designs soon and we’re previewing them today!  For ease of use, I’ve combined all the collections into one post so you can browse through them together.  Since there’s a lot to see, it’s a long article so bear with me.  All the sets are coming out on September 29th, and includes the Bead of the Month (October): Sugar Sleigh Ride 2.0, Dark Shadows Part 3, Puppet Master, Make Beads Not War, Connections, Purple Haze, Dreamscape, and Jiangshi. 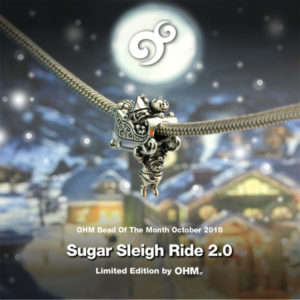 Starting with Sugar Sleigh Ride 2.0, this year’s exclusive is an extension on last year’s hugely popular design featuring Jack, Tom, and Nick riding together.  The 2.0 version includes an additional passenger – the Ohm Gnome!  The brand’s iconic seasoned traveler is along for the ride which makes for a very crowded sleigh forcing Nick to hang on for dear life.  There are only 777 pieces made and if last year was any indication, I’m sure this one will sell out fast! 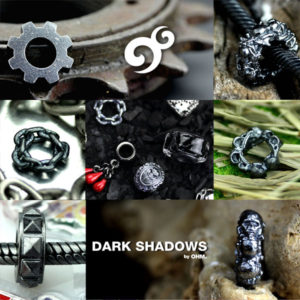 This is the third iteration of the Dark Shadows Collection and it’s been a bestseller for Ohm.  The first set came in dark oxidization whereas the second version was bright silver.  This time, it’s back to “dirty” using a different oxidization technique and includes 6 new designs!  The previously released charms are: Arachnid, Cameo, Cranium, Drops of Life, Finding Time, Last Grasp, Rest In Peace, Sacrifice, Widget, Broken Heart, Dark Soul, and Royal Blood.  In this launch, Ohm is introducing Catacombs, Chained, Corvus, Hot Topic, Mech Tech, and Phobia.  They fit in with the theme perfectly and are like spacers in size.  I’ve written in-depth reviews on the re-releasing designs, and you can check them out here – Ohm Beads Dark Shadows Collection. 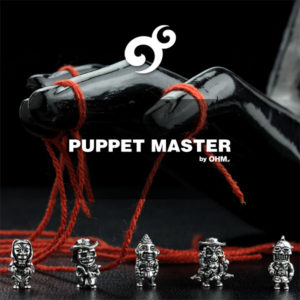 Many of this month’s releases are geared towards Halloween, including the super creepy Puppet Master Collection.  I’m a complete wimp when it comes to scary movies and just these stock photos are sure to give me nightmares.  They’re based on the horror movies and include: Six Shooter, Tunneler, Jester, Blade, and Torch.  This set is limited edition and is perfect for the holiday or anyone with a love of slasher films. 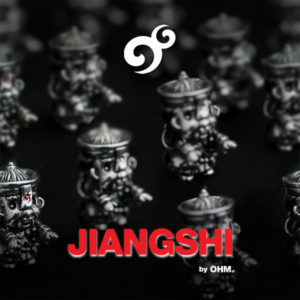 Wrapping up the Halloween theme this month is Jiangshi.  It’s a popular figure in Chinese horror films as a cross between a zombie and vampire.  They’re quite horrid and can only be stopped with an spell written on piece of paper stuck to their forehead.  Ohm has faithfully recreated this monster including the paper on their forehead!  I would love this if I weren’t so terrified of these creatures. 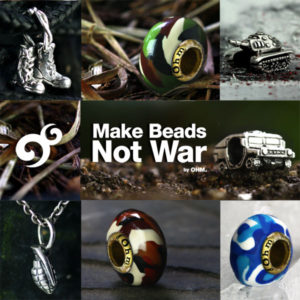 Aside from the scary motif, there are a few other releases in store for us.  The first is a collection called Make Beads Not War, it includes 7 pieces with 4 silver charms and 3 enamel beads.  They’re called: Non Violence, Spread Love, Love is the Answer, Peace is Priceless, Make Peace, Make Love, and Make Out.  The enamel beads have brass cores which is really cool.  Despite the name, these beads would be great for anyone in the service or representing veterans. 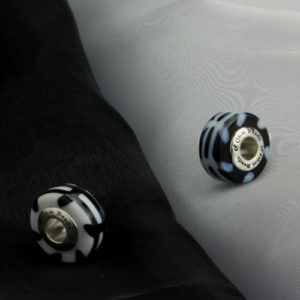 Connections will be a two-bead set and one is black on white, while the other is white on black.  These are inspired by the dichotomy of life – yin yang, ebb flow, up down, heaven hell, masculine feminine, and left right.  They’re named As Below (black with white stripes) and So Below (white with black stripes).  They pair perfectly with Tartan Gore, Country Tartan, and Courage & Loyalty to name a few. 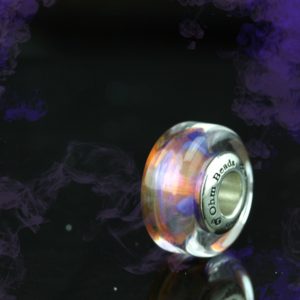 The last two beads are individual releases but it’s going to be hard to get just one of them!  Dreamscape and Purple Haze are iridescent glass beads that come in a range of colors.  The beads are a mix of beige, purple, and amber in varying combinations.  Dreamscape features glitter in the glass whereas Purple Haze does not.  They’re simply gorgeous and really one that you’ll have to pick in person if you have a preference in mind.

There are an incredible number of designs coming out soon and they can preordered from my favorite shop, Perlen.  Ohm Beads have large diameter cores so they can fit on all bracelet styles.  I’m most excited for Sugar Sleigh Ride 2.0 and the Dark Shadows Collection.  What are you most excited to see?