One of my favorite things about Trollbeads are the unique beads.  For those of you unfamiliar with the terminology, “uniques” or OOAKs are usually one-off experiments of color or patterns that Trollbeads’ designers create, and instead of casting them in the trash, they’re distributed to the larger retailer for sale to the general public.  These beads are usually made in limited quanities, although some colors and patterns are more common to find than others, they are unlisted in the Trollbeads catalog and not produced in any consistent manner.  Therefore, deliveries of these glass beads depend on how large the dealer is and is usually a surprise as to what the retailer gets.  This makes any preorders virtually impossible.

Because some beads are more popular than others and since the dealers don’t have a choice in picking out their selection, a number of online stores actually post pictures of the uniques on their Facebook pages’ with buyers placing “dibs” on the ones they want; this is on a first-come-first-serve basis.  For a truly speculator unique, the retailer may even do a random drawing to pick who gets to purchase the bead after a number of ladies enter themselves for selection.  Of course, there is also the traditional method of listing the uniques for sale on the dealer’s website, but photographing these small pieces of glass takes a lot of time and effort, so most brick-and-mortar stores do not even bother to list them on their website. This creates a lot of angst when hunting for these OOAKs, with the buyer having to constantly watch a company’s Facebook page or the website’s unique listings for the opportunity to buy that special unique.  The prices for these vary because Trollbeads sets a minimum for these beads, but allows the retailer to charge more; the uniques are normally $46, with some dealers charging higher for more popular designs.  Of course this is not a comprehensive list, but only patterns that I’ve frequently come across.  My favorite store for bead parties is Trollbeads Delaware’s Facebook page – they are a Diamond Level dealer and receive plenty of uniques on a regular basis. 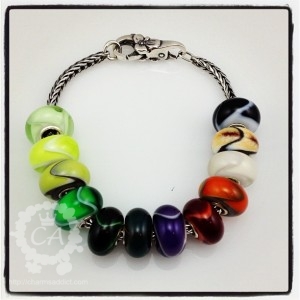 Armadillos or “dillos”are one of the most popular and colorful uniques.  These beads are characterized by the 4 scales that encircle the bead making it resemble an armadillo’s shell. Variations of this pattern include duo colors of the scales, different colors of the separation lines between the scales, and protrusions of glass called “buds”.  There are production dillos as well as uniques, and these include green, mixed green, turquoise, blue, red, purple, orange (retired), white, black, and black squirrel (retired); as well as the rarer retired white with blue lines and grey armadillos.  Gorgeous beads and one of my favorites! 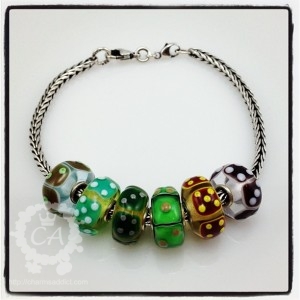 The dice unique is one of the newer designs and features six dice faces numbered sequentially.  The glass, dots, and dice face are all different colors so the combinations are endless.  There is no production version so if you like these, you’ll have to keep a sharp eye out as they’re in high demand.  There is also an older style version of the dice which had protruding dots and are hard to find; the new version was introduced in Vegas Sales Conference 2012 and has been a huge hit and is a relatively common unique, although given its popularity it’s still difficult to come by. 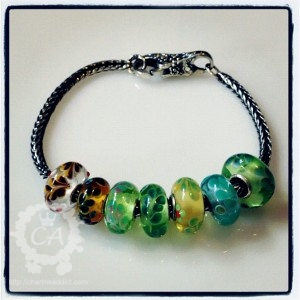 Ferns are one of my favorite uniques as I have a huge preference for floral patterns. The design is characterized by the leafy vines from which this unique gets its name.  I’ve noticed that most ferns are noticeably smaller than other glass beads, “petite” as they’re called, unless they are Universal Uniques in which case the larger core makes the bead bigger as well.  The ferns can be simple, with just one branch of leaves, some have swirl or glitter flourishes, while others are accompanied by tiny flowers.  I just love these little details and that’s why ferns are at the top of my list! 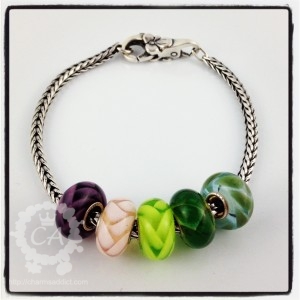 The braid is a relatively simple design compared to the other uniques that Trollbeads have produced, but it’s elegance is in its simplicity.  This unique features diagnal stripes that resemble a braid pattern.  Usually these are one color on either the same colored glass or clear glass, however, there are also two-tone braids which are less common.  The width of the braid can vary quite a bit, with some that look like thin dashes and other look like broad strokes.  This bead is a great staple for whatever bracelet theme you’re working on and is the perfect accent piece. 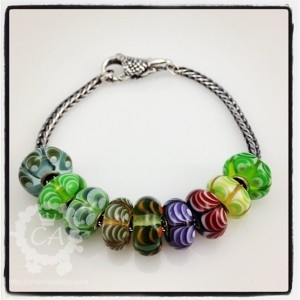 The scallop design features a circular wave pattern, like a scallop shell. The color spreads horizontally across the width of the bead starting from one side to the other. This typical unique is single colored with white separation lines; variations of this bead are two-tone scallops with alternating color bands, and double scallops with the waves going towards the middle from each side. The two-tone and double scallops are rarer and harder to find.  There is no production equivalent to this bead, making it a pure OOAK pattern.

The pythons are another strictly unique style with no matching production bead.  The characteristic of the python is the diamond shapes surrounding the bead, similar to the scales of a snake from which it gets its name.   There are three versions of this design, plain, budded, and budded within circles.  While the plain and budded within circles are harder to find, the budded pythons are more common.  The buds can be different dollops of color or a bit of glitter in the center of the diamond shape, the diamond is usually a different color from the glass, and so are the color of the buds. 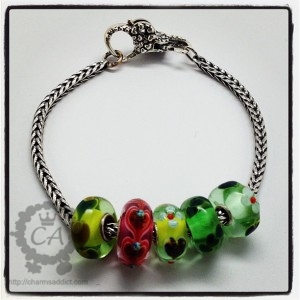 The hearts were first seen in the LE red Christmas kit for 2011, and remained rare until the beginning of 2013 when they flooded the market with not only the original designs, which were a column of hearts drawn through the center, but with many different patterns including hearts and flowers, diagonal string of hearts and many others; for a full list and review refer to Trollbeads Popular Uniques Part 7 – Hearts.  While I’m not normally a fan of hearts, the creative designs make these truly uniques.  In 2014, the brand expanded with another set of heart uniques, and these I posted about here: Trollbeads 2014 Heart Uniques. 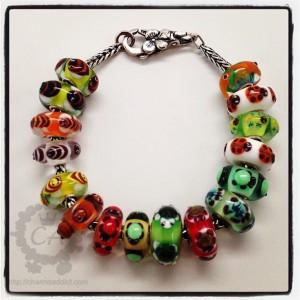 I first wrote on the Trollbeads critter beads in 2013, which were once one of the rarer glass designs. The original critters included turtles, ladybugs, bees, and fish. Since then, Trollbeads has expanded to a wide variety of animals which I expanded on in the Trollbeads Unique Critters Part 2 review, like whales, dolphins, caterpillars, frogs, and lizards to name a few.  These are some of my favorite designs and the brand is still coming out with more critters so I’ll update this index when I review more. 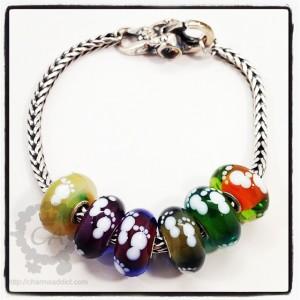 One of the hottest uniques of 2013 were the Trollbeads Footprint designs and they’re still highly sought after!  They appeared for a few months but were difficult to source and rather rare.  This pattern features two white footprints in various colors on both opaque and matte glass.  There is no matching production beads, so this is another purely unique design.  A reemergence of the footprint bead has popped up in August 2014, but it is only in one color and that’s a sandy background with clear glass overlay.