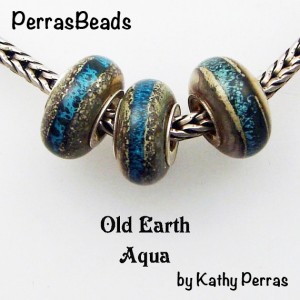 Kathy Perras is an incredible artisan glass designer and I’ve previously featured her popular Siberian Tigers, and her new Mirror Dillos and Snakeskin Dillos.  Today’s post then turns to another of Kathy’s much coveted beads, the Old Earth designs. Kathy’s charm is based on the original Trollbeads Old Earth which was one of the brand’s first glass beads. It’s one of the rarest Trollbeads glass around since it was produced at a time when quantities were small, and for that reason commands a staggering amount when it comes on the market (which apparently is close to never).

Not much information is available on the Old Earth (it’s not even included in the Trollbeads Museum) and for a late-blooming Trollbeads collector like myself, this proved to be quite the mystery. Kathy was a fount of information as she filled in the background for these highly sought-after beads. Originally designed by one of Kathy’s students, Sean Jarvis and later his wife Corinne made these for Trollbeads until roughly 2007/8 when they signed over the rights to Lise Aagaard (owner of Trollbeads). It was several years ago that Kathy approached them to remake these charms to offer newer customers a chance to experience these wonderful creations.

For those reasons, the PerrasBeads Old Earth beads have been coveted for its exquisite craftsmanship and for those seeking a tribute to the old Trollbeads.  The bead is mostly neutral with a bright splash of color in between, the most familiar of which is the shimmering turquoise.  Kathy also offers these with green, red, purple, brown, black, and white.  The color is created with a silver leaf, surrounded by Italian glass although it resembles stone.  I got* a lovely brown Old Earth also named Midas Touch and a sparkly black Old Earth called Dichroic Ice.

The core is lined with silver tubing and the lip curves over the edges of the glass, which is slightly bulkier than Trollbeads glass.  Unfortunately, these are small size and can only fit bracelets without threading like Trollbeads.  These can be purchased from the PerrasBeads Etsy Store and is shipped from Oregon, USA.  I’ve been enjoying Kathy’s beads very much and these are another example of her incredible skill.  I created a bracelet in neutral tones to complement the Old Earth charms, for a lovely versatile look.  How do you think these compare with the Trollbeads Old Earth?  Do you like this design? 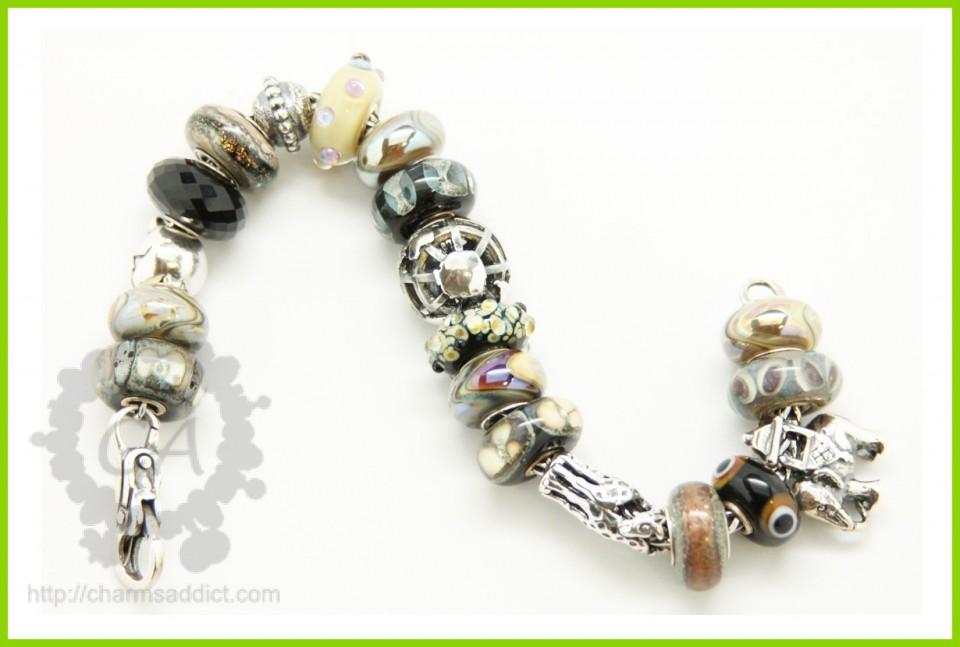