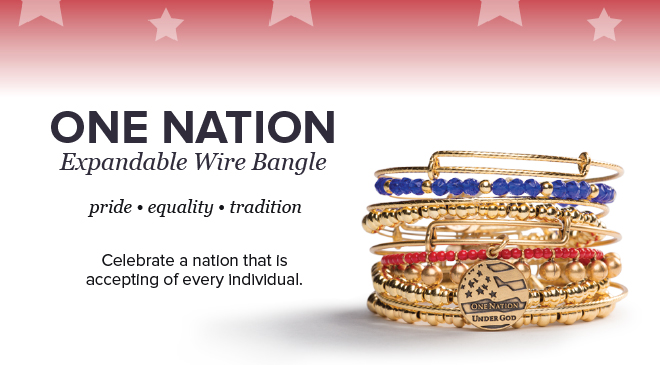 We’re coming up on the 4th of July, the US Independence holiday commemorating our break from England, and it’s going to be quite a few days of celebrations.  The afternoons and evenings will be full of barbeque and fireworks, and it’s also a four-day weekend for me which I’m very excited about.  But amidst the festivities, it’s also a time to remember those that have fought to give us and keep the freedoms that we so enjoy.  Therefore, I’m happy to present a few Independence Day themed bracelets. 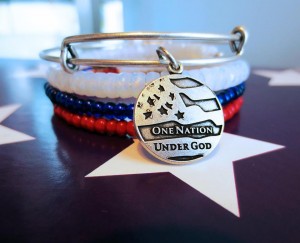 Starting off this Independence Day themed post, is the debut of the One Nation Bangle from Alex and Ani.  Released at the end of June, the One Nation Bangle embodies the spirit of our country: Pride • Equality • Tradition.  The charm features the stars and stripes of the American flag along with the inscription “One Nation Under God”. I love the meaning of this bracelet and I’m so proud of this country! The bangle comes in Russian gold or silver and is an affordable $28 each. 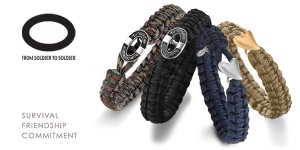 Next, I’m excited to do a formal introduction for the From Soldier to Soldier brand which I briefly mentioned in the Father’s Day, male jewelry post. This is a sister company to Story by Kranz and Ziegler, which is distributed by Lovelinks America for the US. From Soldier to Soldier bracelets are made of parachute cords and also called survival bracelets because the cord can be unraveled and used in an emergency.  Uniform buttons were sewn on as clasps in the battlefield, and they would also be exchanged among servicemembers as friendship bracelets.  These stylized versions included a decorative button or heart as the clasp and are often worn  by both men and women (but very popular among men!).  The best thing about these bracelets is that $20 of every bracelet is donated to Home for Our Troops, an organization that provides housing for wounded veterans, an incredibly worthy and deserving cause.

These are just a few products that are inspired by our country this Fourth of July.  What do you think of these bracelets?  Do you have any exciting plans to celebrate Independence Day?