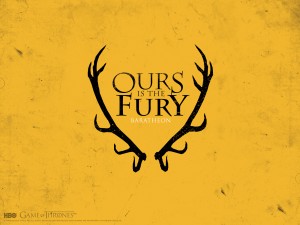 Today we’re back to Westeros in the Game of Thrones series with a feature on the Baratheons. Like many of the other houses in this series, the Baratheons have not had an easy time. Once a mighty family, Robert Baratheon was King of the Andals and the First Men, Lord of the Seven Kingdoms, and Protector of the Realm, until his untimely death in the first book.  Once his “son” succeeded him, it caused a great rift between the remaining brothers, Renly and Stannis as to who should take up the Iron Throne.

Robert was the one to defeat the Mad King; he was a mighty warrior and portrayed as bigger than life.  One of the reasons why he rebelled against the Targaryens is because his intended, Lyanna Stark, was abducted by Prince Rhaegar.  Once he won the war and ended up marrying Cersei Lannister, Robert fell heavily into drinking and womanizing until he was gored by a boar while hunting.

Renly is described as being a popular character, skilled in politics and was once Robert’s Master of Laws on the small council.  He coveted the crown and claimed the throne when questions of Joffrey’s paternity surfaced, starting the War of the Five Kings.  He believed that he would make a better king than his stoic older brother, Stannis.  Stannis disagreed and through the priestess of his new religion, the Lord of Light, assassinates his brother with a shadow.

Stannis is the Lord of Dragonstone after Robert became king and believes himself to be the rightful heir to the Iron Throne.  He is described as a talented martial commander but lacking in personal skills.  He is guided heavily by Melisandre, a priestess to the Lord of Light, who wields dark magic in assisting his quest for the crown.  Stannis modified the original Baratheon sigil to include the flaming red heart of the Lord of Light with the stag in the middle.

Following with the colors of this house, I started with yellow and black as the primary beads.  I was excited to feature the *redbalifrog* Caribou Reindeer as the family mascot stag.  Lady Melisandre is represented by the *redbalifrog* Lady Godiva and the Beaten Heart Locked which looks like flames shooting out from the center.  The Dragon represents Dragonstone and the Trollbeads water lock and World Tour Viking Ship for Stannis’ command of naval forces.  Each of the brothers Baratheon have complex storylines, who is your favorite? 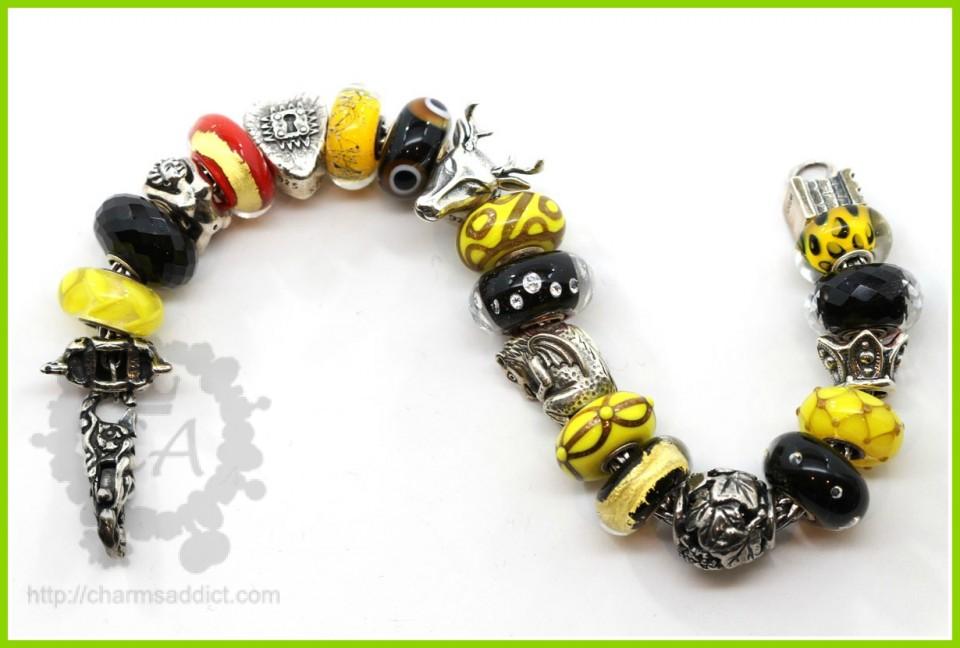