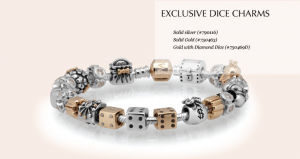 Several charms have recently been made available for purchase on Perlen that were originally country/location exclusives.  I thought I would share the availability of these charms in a consolidated post. 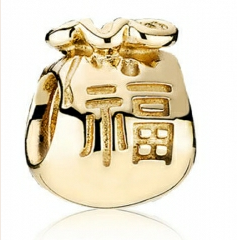 First, a couple of weeks ago Perlen received the gold Chinese New Year fortune bag which was supposed to be an Asian exclusive but I had heard rumors that they would be available in the Central European market so that’s why they have them.  This upset quite a few ladies who had previously purchased the gold hong bao for around $1080USD when Perlen is selling the 14K gold charm for $600USD.  Wow, what a difference!  When a company labels a product as limited edition, either to a specific location or time period, the tendency for hardcore collectors is to run out the door to buy these charms.  It is a bit difficult to stomach when that “limited edition” later becomes more widely distributed, especially if the cost is less than it was sold for originally.  But it does allow more fans to get their hands on these hard to find charms, so I do have conflicted feelings about this development.  The silver hong bao is also available for sale, but this one comes into stock and then out of stock very quickly so customers who still are after this charm will have to keep their eyes peeled.

Another special charm that Perlen has recently gotten is the Las Vegas exclusive gold dice which was introduced specifically for the Vegas Pandora shops in May 2009.  There are 3 varieties of the gold dice, one that is solid gold, one with diamonds, and one with black diamonds; the retail prices for these are actually lower than I imagined: $440USD, $770, and $565 without tax, respectively.  Perlen is offering the solid gold dice for $360USD and the gold dice with diamonds for $757, which isn’t as large a discount as we normally see with charms on Perlen.  The price is still right for some folks because the gold dice with diamonds is already sold out.  Being that these gold dice have been retired and the shops in Vegas are only selling the ones they have left, I would grab one quick before they are gone for good.  Of course, Perlen also has the silver dice which was brought out of retirement for sale in Las Vegas as well, but it has been out of stock for a while now so I’m not sure if Perlen will be receiving more silver dice in the future.

Given that Perlen pretty much delivers worldwide, this is as close to a global release as we will see for these two special gold items.  I have also been told that Perlen expects to the get the silver and two-tone Chinese New Year dragon dangles in the near future, so keep your eye out for that to become available for sale.  Furthermore, Perlen has hinted that they will soon be getting the white gold charms that are currently exclusive to Australia too!  No word on which of the white gold charms or the price points, but I will let you all know as soon I hear anything.